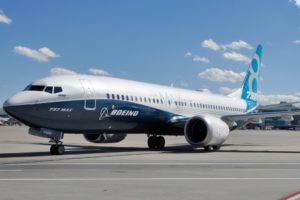 China Aircraft Leasing Group Holdings has entered into an agreement with Boeing to purchase 50 new 737 MAX aircraft for a total of 5.8 billion USD. The delivery of aircraft is planned to be done in stages until 2023. The 737 MAX is the fastest-selling aircraft in the history of Boeing. As of early March, this model received 3,600 orders from 83 customers around the world.

“We are pleased to announce our new partnership with Boeing, which will help accelerate the expansion of the CALC business,” said the CEO of China Aircraft Leasing Group Holdings, POON Ho Man.

Now, the China Aircraft Leasing Company (CALC) includes 87 aircraft. Taking into account the concluded contract with Boeing, as well as the purchase of 89 Airbus aircraft, the total number of airplanes of the company will increase to 226 aircraft until 2023, which represents an increase of 260%.

China Aircraft Leasing Group Holdings Ltd is a Chinese airline company. It was founded in 2006. Provides aircraft leasing services to airlines, mainly in mainland China, as well as in the rest of Asia and Europe.

Boeing produces a wide range of civil and military aircraft, develops space programs. The structure of Boeing operates two large divisions – Boeing Commercial Airplanes, engaged in the construction of civil aircraft, and Integrated Defense Systems, which performs space and military programs. The staff of the company, as of the end of 2016, was 150,500 people.