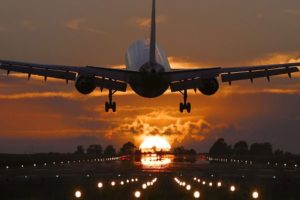 The Chinese Civil Aviation Administration started investigation on the dangers posed by drones for passenger aircraft. According to the regulator, the first experimental collisions of drones with the layout of the nose of the aircraft have already been carried out. According to the results of the study, the Chinese aviation authorities intend to work out new rules for drones aviation.

Every year, the number of drones is constantly increasing: they fly in parks, near airports, they are used for road surveys. Because of this, the chances of a plane crash caused by a collision of a drones with an airplane increase. Earlier, the first clash in the air of a drone and a helicopter and a drone and a passenger aircraft had already been recorded.

The first tests in the framework of the Chinese study of the dangers of airplanes took place on November 30, 2017. They were conducted at the airbase of experimental aviation in Xiangbei. The tests used two drones DJI Phantom 4. They were placed in special suspensions in the air so that when they collide they hit the edge of the windshield of the cockpit and exactly in its middle.

The checks were carried out on windshields inserted into the model of the nose of the aircraft. This model was dispersed on rails. The speed at which the collisions were made is not specified, but defined as “typical”. As a result of the collision, the drones broke the outer layer of the triplex, but did not caused a damage of the internal layer.

Based on the results of the first checks, the Chinese experts came to the conclusion that airplane windscreens certified for resistance to bird strike can withstand collision with ordinary commercial multicopters. It is not specified the exact date for conclusions and completion of the study.

At the end of November 2017, the specialists of the American organization ASSURE published a report on the results of a study of drones colliding with commercial aircraft, which was commissioned by the US Federal Aviation Administration. It turned out that multicopters and small aircraft-type drones in collision represent a significantly greater danger for passenger planes than birds.

As part of the study, computer simulations were made of drones entering airplane windshields, leading edges of the wing and tail, and also in engines. Calculations were carried out for quadrocopters with a mass of 1.2 and 1.8 kg and for drones of aircraft type with a mass of 1.8 and 3.6 kg.

As a result of the calculations, it was found that the most resistant to drones are airplane windshields, while the leading edges of the wing and the engines get serious damage when drones get into them. In this case, damage from drones is more significant than if a bird of the same size and mass were caught in the same place.