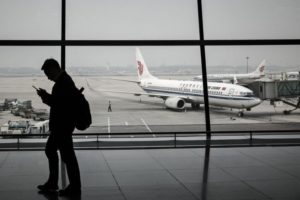 China eased restrictions on usage of portable electronic devices on aircraft, according to the revised version of the rules of passenger transportation, which will be released in October 2017. The airlines will be able to assess the impact of portable electronic gadgets on aircraft flight and develop appropriate rules. It is assumed that passengers will be allowed to use mobile phones in flight mode.

Currently, all Chinese airlines still comply with the old rules and strictly prohibit the mobile phones during the flight. It was thought the wireless signals from those could affect flight safety.

“But now, the government will give airlines the right to decide on their own”, said deputy director of the Department of Flight Standard of the Civil Aviation Administration of China (CAAC), Zhu Tao. “I believe we will see various Chinese airline companies allowing passengers to use portable electronic devices on planes in the near future”, added he.

Being enforced in next month, the rule does not mean passengers could soon use smartphones during flights, as many companies have to set their rules and gain approve from the CAAC. Zhang Wuan, from Spring Airlines, told that passengers may use cell phones during flights in the first half of next year, at the earliest.