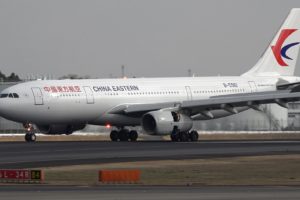 China Eastern Airlines airplane Airbus A330-200 was caught by severe turbulence near Tyumen in Russia. The aircraft with 218 passengers and 16 crew was en route from Paris Charles de Gaulle in France to Kunming in China, but during the flight entered into a zone of low pressure. The turbulence lasted about 10 minutes, including two large jolts causing the aircraft to experience multiple rapid descends and climbs of more than 5,000 fpm. The accident caused injuries of 26 passengers, four of them with serious fractures and head hurt. The airplane proceeded to Kunming in China, where safely landed almost six hours later.

After landing four passengers were taken to hospital, while another 22 were slightly injured. There were no life threatening injuries.

The airline reported that fasten seat belt signs were illuminated however not everyone complied with the instruction. The two large jolts threw everyone not being buckled to the ceiling and then back to the seats. Between the large jolts there were a number of other lesser jolts. This caused the injuries of the passengers.

The airplane did not suffered any damage during the incident.