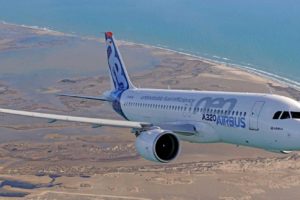 While the US aircraft manufacturer Boeing is trying to overcome the crisis after the two crashes with its latest model 737 Max, its European competitor Airbus was awarded with a new giant order from China. The company signed an agreement for tens of billions of dollars for the delivery of 300 aircraft.

The deal was concluded during the visit of Chinese President Xi Jinping to Europe. The Asian country’s agreement was signed by China Aviation Supplies Holding Company.

It includes the delivery of 290 machines from the A320 and 10 from the A350. The French authorities point out that the deal is worth about 30 billion USD.

The larger-than-expected order comes after an order of 300 Boeing aircraft in 2017 during a meeting between presidents Donald Trump and Xi Jinping.

In recent weeks following the 737 Max incidents, China was among the first countries to ban civilian airplanes.

Asked whether the deal with Airbus came after Boeing’s grounding, the European company commented: “This is a long-term partnership with our Chinese partners, which is developing over time, a sign of trust”.