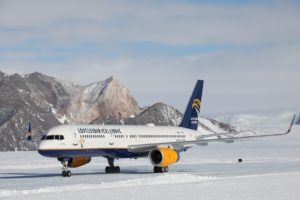 China plans to build the first permanently functioning airport at the South Pole, which will regularly be able to receive tourist groups and research expeditions.

“The infrastructure will include the runway and the air terminal. According to the plan, an airport will be built at the already chosen place. We must wait a few more years before the plan is implemented”, said a Chinese official. According to him, this airport will be built directly on the glacier covering the surface of Antarctica. “An year ago, we conducted research to select the location of a future permanent object — a location where the ice mass shifts slightly and evenly”, added he.

The source recalled that two special runways for emergency landing and refueling, intended for fixed-wing aircraft, were built by Chinese experts in 2009 and 2010. One of them is located 3 km west of the Kunlun Antarctic Station of the PRC. However, according to him, the time has come when the creation of a regular airport at this point in the world is becoming an increasingly urgent need for China.

The specialist stressed that in order to accomplish such a task, it would be necessary to coordinate periodic flights with a number of states capable of providing support for temporary landings – the polar plane Xueing 601 of China, which is planned to be operated to perform such long routes, will have to make intermediate stops in order to obtain technical maintenance, refueling or in case of bad weather. This means that annually the PRC will have to sign supply assistance agreements with many countries of the world.

Beijing is actively engaged in polar research. Chinese scientists have been studying Antarctica since 1984. At the South Pole, the PRC currently has four stations – Changcheng, Zhongshan, Kunlun and Taishan. The latter was opened in 2014. In the future, China plans to build a fifth research base. The Chinese side is showing increased interest in the Arctic, as evidenced by the constantly increasing efforts to study it.