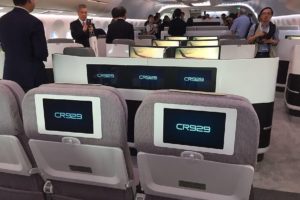 The full-scale model is a concept for the organization of the passenger aircraft in three classes – first, business and economy, as well as the crew cabin on aircraft CR929. The length of the layout is 22.00 m, height is 6.50 m and width is 5.90 m. The salon is equipped with 2 rows of first class seats, 3 rows of business class seats and 4 rows of economy class seats, including a modern entertainment system and interior design in Chinese and Russian styles, combining comfort and innovation.

A full-scale model demonstrates the potential to customers and future passengers, presenting the comfort for economy-class passengers compared to aircraft of the same class. It also reflects the conceptual design of the cockpit of the CR929.

“The cooperation of Russia and China in the program of the wide-body long-haul aircraft is an outstanding example of cooperation in the global aircraft industry. Competitiveness in the highly developed global civil aviation market, especially in the most resource-intensive and complex segment of wide-body aircraft, requires the pooling of efforts, resources, and the advantages of each of the partners. This applies to the economy, technology and experience, as well as human capital. Our companies, UAC and COMAC, set an example of such deep cooperation within the framework of the CR929 program”, said the President of the Russian United Aircraft Corporation, Yury Slyusar.

The main designer of the CR929 from the Russian side, Maxim Litvinov, in turn, recalled that the CR929 program is at the stage of preliminary design and selection of suppliers of basic systems and equipment, which will be completed before the end of 2019. As a result, the final appearance of the aircraft will be formed. He also noted that, in agreement with COMAC, the Engineering Center for the development of wide-body long-haul aircraft will be located in Russia.

About one year ago, a joint venture of PJSC UAC and COMAC – CRAIC (China-Russia Commercial Aircraft International Corporation) was registered in Shanghai. The joint venture performs the function of the CR929 program operator. Responsibilities of the joint venture – production, sales, after-sales service, marketing, business planning and program management. The final assembly of the CR929 aircraft will also be held in Shanghai.