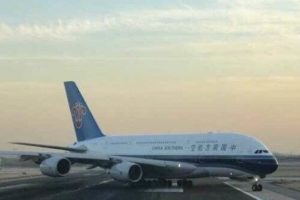 China Southern Airlines Airbus A380-800 suffered runway excursion during maneuvering for departure on Beijing airport. The airplane with 395 passengers entered runway 36R via taxiway, when turned more than the 90 degrees and and came to a stop with the nose gear about 1.0 m off the left runway edge. Following the runway excursion, the aircraft was detained for further checks and inspections. There were no reported injuries during the incident and the aircraft did not suffered any damages.

The runway needed to be closed for about one hour until the aircraft was pushed back. The traffic at Beijing airport was slightly affected, but there were no extraordinary delays.

China Southern Airlines reported the aircraft went off the runway by about one meter due to improper steering operation and needed to be pushed back. The Airbus A380-800 was examined, released back to service and reached Guangzhou with a delay of 5:50 hours. The investigation for the root cause of the accident was initiated.

Airbus A380 is a double-deck, wide-body, four-engine jet airliner manufactured by European manufacturer Airbus. It is the world’s largest passenger airliner, and the airports at which it operates have upgraded facilities to accommodate it. The A380’s upper deck extends along the entire length of the fuselage, with a width equivalent to a wide-body aircraft. This gives the A380-800’s cabin 550 sq m (5,920 sq ft) of usable floor space. The aircraft provides seating capacity for 525 people in a typical three-class configuration or up to 853 people in an all-economy class configuration. The A380-800 has a design range of 8,500 nm (15,700 km), serving the second- and fourth-longest non-stop scheduled flights in the world, and a cruising speed of Mach 0.85 (about 900 km/h at cruising altitude).