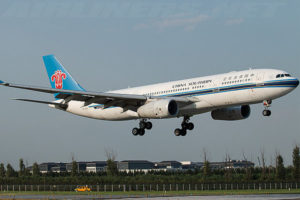 China Southern Airlines has allowed an Alaskan Malamute dog to accompany a disabled passenger as emotional support on a flight. A video with a dog in the passenger seat in the cabin was published on the Weibo social network. In frames, the dog sits quietly in the passenger seat, sticking his tongue out. Many users have noted that they would not mind flying next to such an animal.

The representative of the airline said that the special medical board allowed the Alaskan Malamute to accompany one of the passengers in flight and provided relevant documents as evidence.

China Southern Airlines trained dogs that provide support to their owners are allowed to fly with them for free.

China Southern Airlines is headquartered in Baiyun District, Guangzhou, Guangdong Province, China. Established on 1 July 1988 following the restructuring of the Civil Aviation Administration of China that acquired and merged a number of domestic airlines, the airline became one of China’s “Big Three” airlines (alongside Air China and China Eastern Airlines), the world’s sixth-largest airline measured by passengers carried and Asia’s largest airline in fleet size, revenue and passengers carried.