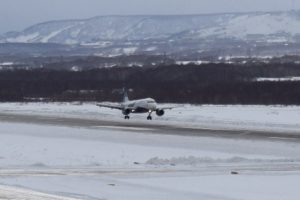 China Southern Airlines assessed the international airport Petropavlovsk-Kamchatsky (Elizovo) as safe for landing and will be used by the airline as reserve airport for flights between South-East Asia and North America.

“At a meeting with the executive director of Petropavlovsk-Kamchatsky International Airport (Elizovo), Sergey Bubnov, Zhu Liang Yu noted that the airline is considering using the main air gates of Kamchatka as a potential reserve airport for China Southern Airlines flights between South-East Asia and North America. Sergey Bubnov spoke about the forthcoming reconstruction of the airport, about available and planned for purchase of technological equipment and etc. Following the meeting, it was decided to launch drafting an agreement of intent for the development of cooperation between the parties”, says the statement.

Dozens of air routes are flying over Kamchatka, making flights between South-East Asia and North America, and the airport’s technical capabilities allow to take even the largest types of aircraft, such as An-124-100 Ruslan, Boeing 747, Airbus A380.

The airport reconstruction project includes the construction of a new terminal with an area of ​​more than 30,000 square meters, which will serve passengers on domestic and international flights. The total amount of private investment in the project will exceed 7 billion rubles with about 150 jobs being created. The new terminal, which will be made in the form of a cone resembling a volcano crater, is planned to be put into operation in 2021.