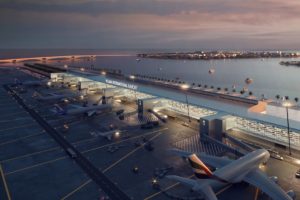 The implementation of the project is the responsibility of the Chinese company Beijing Urban Construction Group.

Speaking at the ground breaking ceremony of the new cargo terminal complex at Velana International Airport, the Minister of Economic Development Maldives Mohamed Saeed said that developing a bigger cargo terminal at the International Airport at a time where the country is making Free Trade Agreements with different countries is the beginning of a re-export market in the Maldives.

“The flights landing in Maldives will be carrying people and cargo”, said Mohamed Saeed, adding that while air cargo would be coming to the Maldives, some of them would be re-exported to other countries. The minister pointed out that Maldives are an important country in the framework of the One Belt One Road Initiative.

The new project will be of fundamental economic importance for the development of the country.

Velana International Airport is the main airport in the Maldives. It is located on Hulhule Island in the North Male Atoll, nearby the capital island Male. Today, the airport is well connected with major airports around the world, mostly serving as the main gateway into the Maldives for tourists. It is managed financially and administratively by an independent corporate entity known as Maldives Airports Company Limited (MACL).