The launching of the Chang’e 5 probe to the moon on Tuesday, in charge of collecting samples of lunar rocks, is a further step in China’s space conquest, started 60 years ago by Mao and now pointing to Mars.

China invests billions of dollars in its space program, trying to catch up with Europe, the United States and Russia.

Among its most ambitious projects is to pose a remote-controlled robot on Mars next year, build a large space station by 2022 or send Chinese to the Moon by 2030.

These are the main stages of the Chinese space conquest:

In 1957, the Soviet Union placed the first man-made satellite, Sputnik, into Earth orbit. The founder of the People’s Republic of China, Mao Zedong, then issued a call to his citizens: “We too will make satellites!”

The first stage took place in 1970. China launched its first satellite with the help of the “Long March” rocket, a name that recalls the journey of the Red Army that allowed Mao to establish himself as the leader of the Chinese Communist Party.

But it will take until 2003 for the Asian giant to send the first Chinese into space, astronaut Yang Liwei, who goes around the Earth 14 times in 21 hours.

With this flight, China became the third country, after the Soviet Union and the United States, to send a human being into space by its own means. 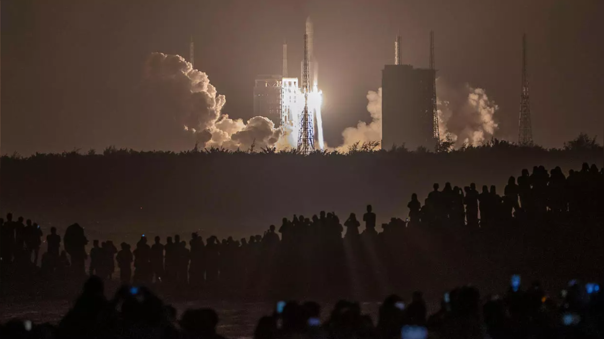 Since then, it has regularly carried out manned space missions.

China had already deliberately ruled out participating in the International Space Station (ISS), which associates Americans, Russians, Europeans, Japanese and Canadians. Your intention is to build your own.

To achieve this, it first launched a small space module, Tiangong-1 (“Celestial Palace 1”), placed in orbit in September 2011. It was used for astronaut training and medical experiments.

In 2013, China’s second astronaut in space, Wang Yaping, gave a live-streamed physics course for hundreds of millions of students and viewers on Earth.

Tiangong-1 stopped working in March 2016. The laboratory was considered as a preliminary stage in the construction of a space station.

Another important milestone took place in 2013: the landing of the small remote-controlled robot “Jade Rabbit”, responsible for taking photographs, for example.

It had technical problems at first, but was eventually reactivated and explored the lunar surface for 31 months, much longer than its expected lifespan.

In 2016, China launched its second Tiangong-2 space module. The astronauts carried out, among other maneuvers, technical couplings.

Under the slogan of Chinese President Xi Jinping’s “dream of space”, the country is now aiming for even greater goals.

The assembly of its space station would begin this year and should be completed in 2022. China would become the third country to build one on its own (after the United States and the USSR).

The Asian giant also plans to build a base on the Moon. The head of the Chinese space agency (CNSA) declared that the intention is to send a manned mission towards the only natural satellite of the Earth by 2029.

The Chinese space program failed in the summer of 2017 with the failed launch of Long March 5, crucial because it enables it to propel the heavy cargo needed for some missions.

This setback led to the three-year postponement of the Chang’e 5 mission, which was finally launched on Tuesday.

China had struck a great blow in January 2019 with a world first: the landing of a remote-controlled robot (the “Jade Rabbit 2”) on the far side of the Moon.

The country launched in June 2020 the last satellite to complete its Beidou navigation system (competitor of the American GPS). The following month, he sent a probe to Mars.

In May of next year I should land a vehicle on Martian soil.

Astronauts and scientists have also spoken of the possible sending of Chinese to the red planet in a more distant future.