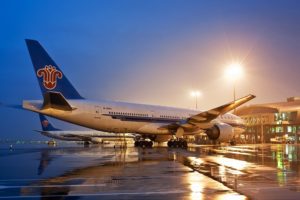 By the end of 2035, China plans to become an “aviation leader”. The number of airports in the republic can almost double from 234 to 450.

According to experts, in the next few years, China will overtake the United States in terms of air traffic, which will be almost a quarter of all world flights. Last year, the total passenger traffic in China reached 552 million travelers, and by 2020 it is expected to grow to 720 million.

New airports will be built in the Beijing-Tianjin-Hebei region, in the Yangtze River Delta and the Great Bay of Guangdong-Hong Kong-Macao region, as well as in the cities of Chongqing and Chengdu. Air hubs are expected to contribute to the economic development of these areas. In addition, it is planned to expand the air terminal in Urumqi – the largest industrial area of ​the country – and increase its capacity to 63 million passengers per year.

According to the international supplier of IT solutions for the air transport industry SITA, the budget for the construction of new airports in China has significant costs for cybersecurity and the introduction of modern technologies.