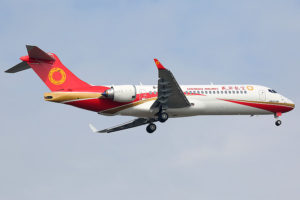 According to COMAC, Genghis Khan Airlines and Chengdu Airlines have signed a framework cooperation agreement to promote the large-scale operation of civil aircraft. The collaboration includes the expansion of the air transport market, operational support, exchange of information on operations, tourism business and financial investments.

Regional airliner ARJ21 with the number of seats from 78 to 90, is able to fly a distance of up to 3,700 km and is able to adapt to different conditions at the airport.

The first aircraft of this type was delivered to Chengdu Airlines in 2015. Currently, the company has 10 ARJ21 and used them to transport more than 230,000 passengers on routes connecting more than 20 cities in China.

Genghis Khan Airlines was founded in March 2018 and is based at Hohhot Baita International Airport in Inner Mongolia, an autonomous region of China. Last October, Genghis Khan Airlines signed an agreement with COMAC on the purchase of ARJ21 aircraft, making it the first airline with a fleet of only aircraft of this type.