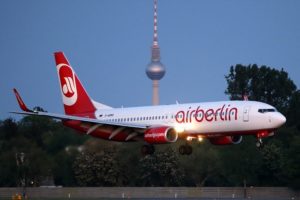 Chinese airport operator LinkGlobal has interest in acquisition of the bankrupted German airline Air Berlin. The intention was sent is written statement to the management of the airline.

“We were informed that Air Berlin was looking for a reliable investor for its acquisition. We hereby announce our interest and intentions in this direction”, said the Chief Exclusive Officer of LinkGlobal, Jonathan Pan.

A specific offer will be provided by the Chinese company before the expiry of the deadline at 14:00 local time on Friday.

According to industry analysts, Pan is likely to move the entire airline to Parhim.

“We think there might be a so-called Win-Win situation for Air Berlin and Parhim airport if the company base is moved to our airport”, wrote Jonathan Pan in his letter. Air Berlin’s syndicates have not commented on the intention of the Chinese concern.

Meanwhile, the company is threatened with new flight delays and cancellations.

“For tomorrow, we have 149 applications for leave because of sickness of pilots”, the company said late on Tuesday.