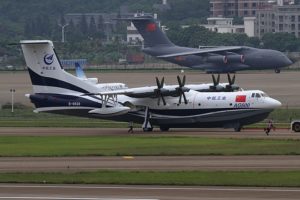 The Chinese amphibian aircraft AG600 made its first flight to the Southern province of Guangdong. The AG600 amphibious aircraft Kunlong successfully landed from the Jinwang Civil Aviation Airport in Zhuhai City. The first flight lasted about an hour.

“The first flight was successful, and this fact puts China in the ranks of a few countries in the world that can develop a large-scale seaplane”, said the chief designer of the AG600 seaplane.

The AVIC AG600, code named Kunlongis the largest amphibious aircraft currently flying. It is designed by the Aviation Industry Corporation of China (AVIC). The aircraft made its first flight in Zhuhai, Guangdong on 24 December 2017. The AG600 is one of China’s three state-approved “big plane projects”. According to sources in the AVIC, the maximum takeoff weight of the AG600 is 53.5 tons. It can reach speeds of up to 500 km/h and stay in the air for up to 12 hours. The AVIC AG600 is an amphibious aircraft having the hull of a flying boat for waterborne operations along with a wheeled retractable undercarriage for alighting on land.

The company-developer said earlier this year that it received orders immediately for 17 machines of the AG600 type.

It is believed that the AG600 is the world’s largest modern amphibian aircraft.