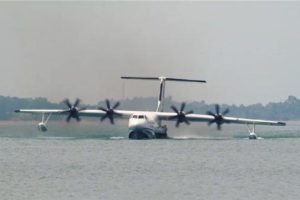 The amphibious aircraft Jilong AG600, which is under development by the Aviation Industry Corporation of China (AVIC), successfully completed the next stage of testing on water. The experts evaluated the aircraft’s glide on the water surface at high speed.

Since August 27, the aircraft has been located at the Changhe hydrodrome in Hubei Province, where it has passed a number of important tests, including gliding at low and medium speeds.

“This time, the plane made a test of sliding on the water surface at high speed. During the tests, it was mainly possible to check the ability to steer in a straight line, as well as its maneuverability, stability while moving and water resistance. All aircraft systems work stably, in normal mode”, says the statement of Aviation Industry Corporation of China (AVIC).

Next, the most important stage of testing should take place – takeoff from the water surface.

This is the largest amphibious aircraft, not only in China but also in the world. The aircraft is intended to extinguish fires and conduct rescue operations on the water. In addition, the AG600 can be equipped with additional equipment for monitoring the marine environment, passenger and freight traffic, and mineral exploration.

The aircraft is equipped with four turboprop engines, capable of collecting on board 12 tons of water in 20 seconds. The maximum take-off weight of the AG600 is 53.5 tons, the hull length is 39.30 m, the wingspan is 38.80 m, and the maximum flight range is 4,500 kilometers. At a time, the plane can carry up to 50 people.

In December 2017, the AG600 successfully completed its first test flight from the ground. The AG600 project was approved in June 2009, and the assembly was completed in July 2016.