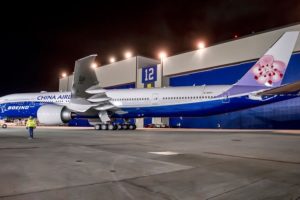 Chinese airplane Boeing landed by emergency on Sheremetyevo airport in Moscow, Russia. The aircraft was en route from Frankfurt to Beijing, but asked for an unplanned landing in Russian capital, as one of the passengers with Chinese nationality was drunk and began to injure himself. It was decided to put the plane in Sheremetyevo.

After boarding, policemen and doctors boarded the aircraft. The doctors provided first aid to the victim. However, the carrier refused to allow the passenger to fly. As a result, the man was expelled from the liner along with his family. The further fate of tourists is unknown.

It is specified that during landing the violent passenger managed to break up the side dishes and cut his hand.

The investigation for the accident is under way. The man will be brought to court for hooliganism.