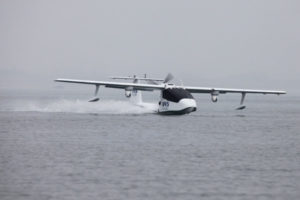 The founder and chairman of the board of directors of the UVS Intelligence System, Liu Jiandong, told reporters that the production of UAVs, which is capable of landing and taking off from the water surface, has already been established in Shanghai. The first serial samples will be delivered to customers as early as the end of 2017.

Liu Jiandong refused to name his customers, referring to the confidentiality of the transaction, but experts believe that they may be express delivery services from South-East Asia. He said his company sees domestic and foreign couriers as the U650’s primary users. The drones can be used to deliver parcels to remote islands, which significantly reduces transportation costs and delivery time.

The U650 was developed on the basis of the Spanish ultralight aircraft Colyaer Freedom S100, which intellectual property rights were fully acquired by the Chinese company. The first tests of the U650 took place in December 2015.

An unmanned amphibian aircraft U650 has length of 5.85 m, made of carbon fiber and is capable of being in the air for up to 15 hours with a cruising speed of 180 km/h. The maximum range of the drone is 2,000 km. The UAV is able to take off and land on short ground runways and a water surface. The cargo capacity on board of the U650 amphibian UAV is 250 kg.

As previously reported, the world’s first cargo drones will be tested already in October in China. A unique aircraft was created by specialists from several research institutes.