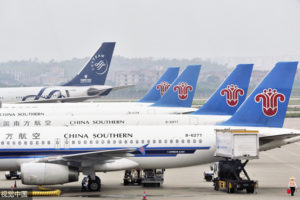 The General Directorate of Civil Aviation of China reported that the accuracy of flights of Chinese airlines in 2018 reached a record level since 2010 – up to 80.13%. The data show that last year scheduled departures increased by 8.89 percentage points to 82.51%. At the same time, the average flight delay was 15 minutes, which is 9 minutes less than in 2017.

All this became possible thanks to the launch by the mentioned department in 2018 of a special campaign to improve the quality of service and management of the civil aviation industry.

Thanks to the government strategy, 225 million passengers saved 18.75 million hours.

The office said it would continue to seek improvements in punctuality at work at airports, quality of service when selling tickets, access to WiFi on flights and handling complaints.

At present, China is the second largest civil aviation market in the world after the United States. In 2018, 610 million passengers were transported by air in the country. In 2019, this figure is expected to reach 680 million.

According to the forecast of the International Air Transport Association (IATA), in 2025 China will become the world’s largest civil aviation market. By 2037, the volume of passenger traffic in China will reach 1.6 billion people.