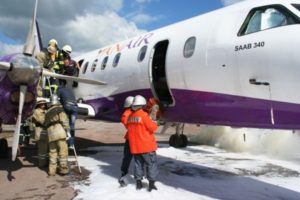 Chinese holding is ready to invest 10 million USD in the construction of a new runway at Zhytomyr Airport. According to the City Council, such a statement was made by representatives of the company Cccc First Highway Engineering Co Ltd (CFHEC) during the meeting with the owner of the airport and the mayor of the Ukrainian city Sergey Sukhomlin.

“Our Chinese partners are interested in the construction of a modern runway at Zhytomyr airport, and if this project succeeds, Zhytomyr will really accept the arrival of low-cost carriers”, said Sergey Sukhomlin.

In January 2016, the regional Zhytomyr Airport took the first technical flight of the Saab 340 plane of the airline Yanair after 25 years of actual idle.

As the director of the airport Sergey Budyak informed then, the start of the operation of the aerodrome was given.

Zhytomyr International Airport is an airport in Ukraine. The airport started operating in 1939, but in November 2011 it was stripped from its registration as civil airport because it had not received any airplanes since 1990. On 30 December 2015 the airport again received an airport certificate and reopened on 29 January 2016, with the (technical) flight of a Saab 340.