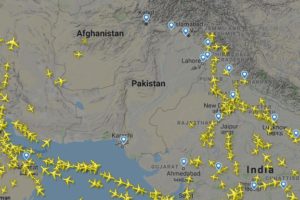 Tensions between Pakistan and India serious disturbed the air traffic in the region. The sky of Pakistan is clean according to the latest monitoring of flights from FlightRadar24. Pakistan has dropped two Indian fighters, афтер тхе Indian planes made an air strike on Pakistan’s territory for the first time since the 1971 war.

The air traffic from New Delhi to the Middle East and West was redirected toward Gujarat state and then heading to the Gulf of Oman, passing on at least 200 miles from the coast of Pakistan.

Indian airports in Amritsar, Srinagar, Jammu, Pathankot, and Leh were closed for civilian air traffic amid the escalation of cross-Line of Control shelling between armies of India and Pakistan. Pakistan’s fighter jets incursion inside the Indian border, causing serious security problems for the airport.

An Indian Air Force (IAF) asked airlines to stop operations to these airports. The civilian air traffic to Dehradun and Dharamshala airports have also been suspended.