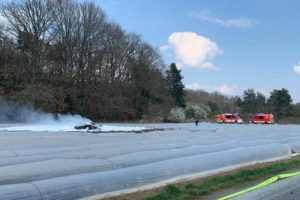 The co-owner of Russian S7 Airlines, Natalia Fileva, died in a plane crash in Germany. She was on board on a single-engine, six-seat Epic LT aircraft that crashed and burned in a field as it approached the small airport at Egelsbach, a town in southwestern Germany. The aircraft took off from Cannes-Mandelieu Airport and was in a final approach of the runway 08 of Egelsbach Airport, but due to unknown circumstances crashed at an asparagus field. All three people on board died in the post-impact fire.

“S7 Group team extends sincere and heartfelt condolences to Mrs Fileva’s family and loved ones”, the company said in a statement. “The memory of her as an inspiring and sympathetic leader and a wonderful person will forever stay in the hearts of all S7 Group employees. It is an irreparable loss”, adds the statement.

Investigation of the accident will be conducted by an international commission, it adds, with participation from Russian aviation authorities.

Natalia Fileva is co-owner of Russian airline S7 Group, considered that being one of the richest women in Russia. Her wealth was estimated at 660 million USD. S7 Group is owned by Fileva and her husband Vladislav Filev. This is the largest private aviation holding company in Russia, it includes about 15 companies, the largest of which are Siberia and Globus Airlines. S7 ranks second in terms of air traffic in Russia after Aeroflot.

Epic LT is an American kit-built single-engined turboprop aircraft intended for use by private pilots. It has a low-wing layout with the tailplanes mid-set on a single fin. The tricycle undercarriage is fully retractable. Its construction uses composites incorporating carbon fibers. The engine is a Pratt & Whitney PT6-67A turboprop flat rated to 1200 hp.