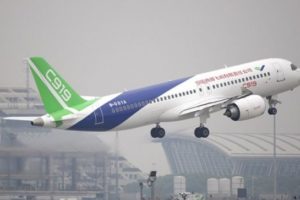 The total received orders until now are 815, while COMAC plans to produce more than 2,000 aircraft from that type. The C919, a 158-seat standard narrow-body airliner, is intended in its first version mainly for Chinese operators.

The first C919 passenger jet had completed its maiden flight in May 2017, while a second model carried out its inaugural test flight in December. According to COMAC, a total of six C919 aircraft will be flight tested before they start commercial operations in 2020.

The C919 is a narrow-body aircraft, similar to over half the commercial planes currently active worldwide, and can accommodate between 158-174 passengers, with a range of 4,075-5,555 km. The C919 passenger jet, China’s bid to rival Boeing 737 and the Airbus A320, completed its first long-distance flight in November last year.