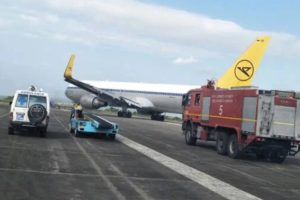 Condor airplane Boeing 767 made emergency landing in Mombasa, Kenya after bird strike. The aircraft aborted climbing after takeoff from the Kenyan international airport after two crows were ingested by one of the engines. The airplane Boeing 767 landed safely without causing injuries to the passengers.

At the scene were dispatched firefighters and rescuers, as well as security officers from the local authorities and police. The investigation for the root cause of the accident is under way.

“I am informed that there was a bird strike but all the passengers are safe. They are awaiting further instructions”, said regional police boss, Noah Mwivanda.

The plane was taking tourists to Zanzibar for holiday. As the aircraft remained on land for repairs and inspections, the passengers were rebooked for another replacement plane to Zanzibar tomorrow.

The Boeing 767 is a mid- to large-size, mid- to long-range, wide-body twin-engine jet airliner built by Boeing Commercial Airplanes. It was Boeing’s first wide-body twinjet and its first airliner with a two-crew glass cockpit. The aircraft has two turbofan engines, a conventional tail, and, for reduced aerodynamic drag, a supercritical wing design.