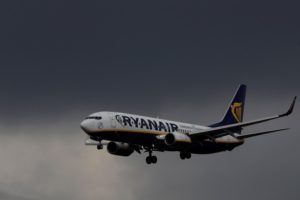 Irish low-cost airline Ryanair may cancel more flights than the company has originally announced. The CEO of the airline Michael O’Leary and his management team are entering into a dangerous battle with pilots, who urge the airline to introduce national labor contracts for all employees, including social security

“We want regional contracts according to the laws of each country”, says a pilot, who wants to remain anonymous, and if the demands are not met, officials threaten “action under the regulation”, which means that employees are at their jobs but do not take any personal initiative and only apply internal company rules.

The critics have long accused the company of employing people with incomplete insurance and self-employed. According to internal communication, the pilots complain about the lack of job security and the lack of retirement benefits. Ryanair has neither work council, nor an organized trade union.

Most of the Irish company’s European bases have joined in the requests to introduce new employee contracts from January 1, 2018.

The reason for the initial protests of the employees was the wrong planning of pilots’ paid leave. Therefore, Ryanair canceled 2,100 flights by the end of October, affecting more than 315,000 passengers.

To avoid canceling new flights, the company has been trying to force pilots to give up their already approved paid leaves against bonuses. But the proposal has received little support, with almost no one wanting to help the group. After pilots of the carrier rejected the 12,000 EUR non-tax bonus offer to give up their planned holidays, Michael O’Leary announced that the company plans to hire 125 new pilots within the “next week or two” to prevent a new wave of canceled flights.

But after he announced new cuts in possible leaves for 2018, the company’s CEO only further exacerbated the already deteriorated atmosphere among the pilots. There is an open confrontation. For example, O’Leary told shareholders that unions are trying to “bloody the nose” of the company. And while the Ryanair director is not willing to meet the requirements of the pilots, they can use new means of pressure through new cancelled flights. The first deadline for meeting the demands of the pilots was already omitted by the management. The Employee Representative Committees are now discussing their next actions, which are likely to lead to a complete confrontation.

Rayanair has canceled over 2,000 flights due to mistake when planning pilots’ vacations. Over 400,000 people are affected by the problem. The carrier’s decision was announced last week, when Ryanair announced that by the end of October will cancel 40-50 flights per day from airports across Europe.

The European Commission has urged last weekend the airline to meet its obligations to the passengers, offering alternatives and returning the money for compensation. Consumer organizations in Italy, Spain, Belgium and Portugal have announced joint actions to protect passengers, threatening Rayanair that if it does not take action within eight days to compensate its customers, they will bring it to court.