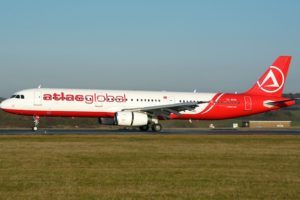 Nine gates of the airport in Copenhagen were closed against threat for aircraft of Turkish airline Atlasglobal in Europe. The local police blocked the gates C30-C39 at the airport amid a police checked Turkish aircraft, which landed several minutes earlier. The Atlasglobal plane had been moved to a remote part of the airport while police carried out further investigations.

The reason for the check is unknown and further investigation was carried out.

“Copenhagen police have said there is a threat against all Atlasglobal’s planes in Europe”, said the Copenhagen Airports spokesman said.

Copenhagen police confirmed about the investigation, without revealing specific details.

Later the airport operations returned to normal with insufficient delays. The Turkish airline Atlasglobal said flights out of Copenhagen had resumed as normal, after security checks found “nothing negative” following a threat to its planes.

“After receiving notice concerning the Atlasglobal flights in Copenhagen Airport, security units were contacted”, said Atlasglobal in the statement. “Necessary security measures were taken, and security units conducted necessary inspections. Nothing negative was encountered. We would like to inform the public that our flight operations in Copenhagen are back to their routine course”, adds the statement.

AtlasGlobal is a Turkish airline headquartered in Istanbul, which operates scheduled domestic and international passenger services as well as charter flights, mostly out of its base at Istanbul Atatürk Airport.