After weeks of uncertainty, in which the few flights enabled in the midst of the closure of borders were becoming known of one and when they were very few hours before their takeoff, the Government arrived at a new method in its repatriation strategy.

It defined the elaboration of weekly flight plans destined to bring back Argentines stranded in different parts of the world.

The scheme will be planned taking into account the limit of 700 income per day allowed at Ezeiza airport and the actual average number of passengers entering daily, between 300 and 400, a volume that the Government intends to maintain.

The priority remains being able to manage all arrivals safely to prevent repatriations from triggering the health risk in the country amid the coronavirus pandemic.

The Minister of Health, Ginés González García, assigned one of his officials to work specifically on preparing the weekly flight schedules.

This is Arnaldo Medina, Secretary of Health Quality of that portfolio, who will work together with the Foreign Ministry staff, under the command of Felipe Solá. 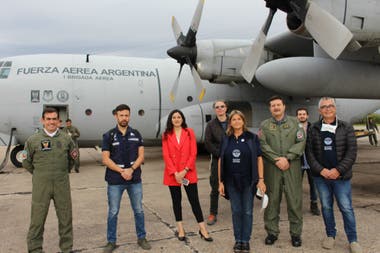 As this newspaper was able to reconstruct, this week’s flight schedule will prioritize destinations within Latin America, although that does not mean that points in Europe and the United States will definitely come to the background, where there are still thousands of Argentines waiting to return.

“The strategy is changing week by week. 20 days ago Ecuador was not on the radar and now it is a priority,” they say near Solá, and they say that the Ministry of Foreign Affairs sent two Hercules planes today with four white helmets to be installed in Guayaquil to assist to the consulate.

This week’s scheme began with a flight to Cancun operated by Latam, which is expected to land today at 9:15 p.m. in Ezeiza.

A flight to Peru from the low-cost airline JetSmart is scheduled for Tuesday the 14th , which for the first time will take Peruvians stranded in the country and will bring Argentines.

Possibly also tomorrow, Tuesday the 14th, an Air Force Fokker will depart to the Brazilian city of São Paulo with the aim of bringing older people.

In the Foreign Ministry they still do not know how they will do to bring (if they decide to do so) to some of the Argentines who are infected with Covid-19.

On Wednesday the 15th, the schedule indicates that there will be another flight from Cancun, but in this case from Aerolineas Argentinas.

That Mexican city is one of the “funnels” of the stranded, since people who are in other nearby cities move to Cancun in the hope of having a better chance of finding a flight to the country. The same thing that happens in the United States with Miami.

On Wednesday the 15th, it is also stipulated that a Hercules C-130 of the Guayaquil Air Force travel, and on Thursday the 16th, another Aerolineas Argentinas flight to Punta Cana, in the Dominican Republic.

On the other hand, on Friday the 17th Latam will operate a return flight from Sydney, Australia, to Buenos Aires.

It will make a stopover in Santiago de Chile and will be the first Argentine repatriation flight to depart from Oceania, which is a message of encouragement for those stranded in remote destinations.

Many of these flights are possible thanks to an important diplomatic agreement signed between Argentina, Peru, Mexico and Uruguay with the objective of cooperating with each other in the repatriation of their citizens.

The tickets on these special flights are sold by the airlines that operate them, but only to those people who appear on lists previously assembled by the Argentine consulates in each country. When making these lists, people with health problems have priority today.

There are only some exceptions to special flights chartered by the Ministry of Foreign Affairs, such as those of Cubana de Aviación, in which the Argentine Government takes the original ticket of each repatriated Argentine with the objective of subsequently demanding payment from the corresponding airline for the service not provided.

The Ministry of Foreign Affairs’ criteria is that, if Aerolineas Argentinas can fly, it is the flag carrier that operates the special services.

“With private airlines, the deal is different, because the financial issue is in the middle and many times they want to sell tickets to everyone and not to the people on our lists,” they say at the Foreign Ministry.” On the other hand, Aerolíneas Argentinas is at a loss, with volunteer crew and somehow has the obligation to go.

Private airlines take out the accounts and it takes longer to negotiate,” they point out.

Newer PostThe Donation of Implements from the United States Reaches the Military in Guayaquil
Older PostBoeing Discovers Two New Flaws in 737 MAX Software: Could this Mean More Failure for the Line of Aircraft?