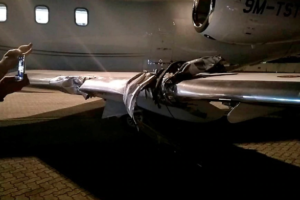 A corporate jet Bombardier Challenger 300 collided with an airport engineering vehicle after landing on runway 15 at Kuala Lumpur-Sultan Abdul Aziz Shah Airport, Malaysia. Following the crash, the airport worker is in critical condition, while the airplane suffered significant damage to its left-hand wing. The passengers and cabin crew of the aircraft were safe and unharmed.

The incident was first reported to the Airport Fire and Rescue Service team which arrived some minutes after the collision. The paramedics made first aid to the injured person and transported him to the local hospital.

“We are saddened to inform that our staff who was the driver of the vehicle was critically injured”, says the official statement of Kuala Lumpur-Sultan Abdul Aziz Shah Airport. “The staff is currently undergoing surgery and we are ensuring that he receives the best medical care, as we pray for his recovery”, adds the statement.