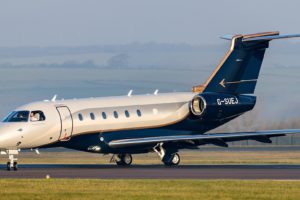 Corporate jet Embraer EMB-550 Legacy 500 suffered damages during hard landing at Paris-Le Bourget Airport. The aircraft was en route from Domodedovo Airport in Russian to Paris, but at landing on runway 27 at Le Bourget touched the ground too hard, causing the right main landing gear to punctures the wing. The aircraft succeeded to landed on the runway, but stopped on the edge. Fortunately during the accident there were no reported injuries among the passengers and crew.

The Russian Interstate Aviation Committee (IAC) appointed an authorized representative to participate in the investigation. The root cause of the accident will be assessed during the next days.

The aircraft Embraer EMB-550 Legacy 500 remains on ground during further repairs and safety inspection. More details about the incident were not revealed.

Embraer EMB-550 Legacy 500 is mid-size business jets launched by Embraer in April 2008, the first of their size with a flat-floor stand-up cabin and fly-by-wire. The aircraft typically carries 4 passengers over 3,125 nmi (5,790 km) with room for up to 12.

Newer PostStarbow Airlines ATR-72-212A veered off the runway during takeoff at Accra airport in Ghana
Older PostRevenue of Aeroflot increased by 6.2% during the first nine months of the year