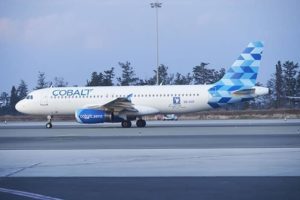 Cyprus airline Cobalt Air filled for bankruptcy and ceased operations. The carrier announced passengers not to come to the airports, but to ask for a refund.

“We regret to announce that from 23:50 on October 17, all Cobalt Air flights have been canceled due to bankruptcy. All passengers holding tickets are advised not to go to Larnaca airport and all other airports, since no flights will be be carried out, and the entire staff of the airline will not come to work”, says the official statement of Cobalt Air.

The airline offers passengers to seek reimbursement of funds from the travel agencies, which sold them the tickets.

“We apologize for the inconvenience and thank loyal customers for their support over the past two years”, adds the statement of Cobalt Air.

Cyprus Transport Minister Vasiliki Anastasiadou pledged state support for all those stranded either in Cyprus or overseas by the collapse of Cobalt Air, as the airline expressed great regret for the suspension of its operations, saying it was a “sad day” for employees and passengers alike. Anastasiadou said telephone numbers would be announced soon to help passengers stranded either in Cyprus or overseas.

“The priority for the ministry is to help the people who have been stranded”, said Vasiliki Anastasiadou, adding the numbers would help provide single tickets for travellers to get back to where they started from.

In a ministry’s official report on the website of Larnaca Airport, Cobalt passengers who are due to depart on October 18 are offered to buy a new economy class return ticket and save all payment documents. The cost of their tickets will be covered by the government. For those who must fly within the next week, information about the return will be provided additionally.

Cobalt Air filled for bankruptcy after failure in negotiations with a potential investor.