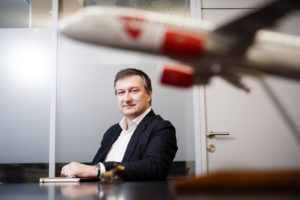 During the first six months of this year, Czech Airlines carried a total of 1.174 million passengers on its scheduled flights. On year-on-year basis, this is almost 22% more, when only 0.963 million passengers were transported. Czech Airlines also managed to fill the aircraft better, as the average commercial load in the first half of the year reached 81%, which indicates an improvement in the average annual indicator by 11 percentage points.

Another 170,000 passengers were transported by Czech Airlines on charter flights or on the routes of other airlines to which the Czech national carrier leased planes with crews.

“Our transport results were due to the favorable economic situation in Europe and the global growth in demand for air transportation. There is year-on-year growth on almost all markets we work, but above all significant improvement was notice in Western Europe and Russia. Thanks to the stabilization of the Russian market, we have increased our efficiency on these routes back and forth by almost a third”, Chairman of the Czech Airlines Board of Directors, Jozef Sincak. “The improvement of transport results was facilitated by the introduction of new profitable price packages in December last year and the expansion of the aircraft fleet with one ATR 72 aircraft, as well as the opening of several new routes or the introduction of additional flights on some already operated ones”, added he.

Czech Airlines is the national airline of the Czech Republic. Its head office is on the grounds of 6th district Prague, Vokovice. The airline’s hub is at Vaclav Havel Airport Prague. However, it has other bases in the Czech city of Karlovy Vary and the Slovak cities of Bratislava and Košice. Today, it operates scheduled, charter, and cargo flights.