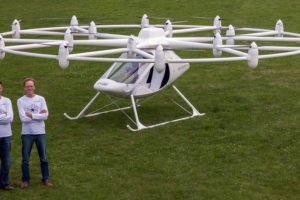 Daimler invests 35 million USD in Volocopter company that is developing a flying electric taxi. The company intends to join the consortium, which includes the organization of the engineer Lukasz Gadovsky, a member of the Supervisory Board of Delivery Hero, which provides goods delivery services. Previously, representatives of Volocopter stated that they are developing a flying five-seater electric vehicle, which will be able to make vertical take-off and landing.

It was reported that this car will be focused on the taxi market and the company intends to demonstrate its work in the fourth quarter of 2017.

The German companies Lilium Jet and eVolo, as well as Terrafugia and Joby Aviation from the USA, will be competitors of Volocopter. A giant aircraft manufacturer Airbus is also developing a single-seat flying car.

In July 2017, the Chinese group Geely said that wanted to buy the company Terrafugia. It is known that Terrafugia is also developing aeromobile Transition TF-X, capable of performing vertical takeoff and landing.