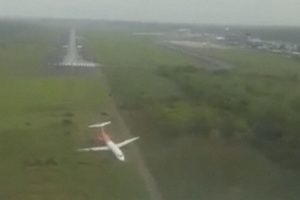 Dana Air plane McDonnell Douglas MD-83 overran the Port Harcourt’s runway during landing in poor weather conditions. The aircraft with 44 passengers and 6 crew went through the localizer antenna and stopped on soft ground about 400 meters after the end of the runway. All the passengers were disembarked and transferred by bus to the terminal, but fortunately no injuries were reported. At the scene arrived fire brigade and medical team, which assisted with evacuation of the people.

The aircraft suffered sufficient damages and the traffic at the airport was blocked until further inspection.

Nigeria’s Airport Authority initiated investigation for the root cause of the accident. According to preliminary information, the aircraft overran the runway due to heavy rain accompanied by strong winds and storm.

McDonnell Douglas MD-83 is twin-engine, short- to medium-range, single-aisle commercial jet airliner. It was lengthened and updated from the DC-9. This series can seat from 130 to 172 passengers depending on variant and seating configuration. The MD-83 (DC-9-83) is a longer range version of the basic MD-81/82 with higher weights, more powerful engines, and increased fuel capacity. The aircraft is equipped with slightly more powerful 21,000 lbf (93 kN) thrust Pratt and Whitney JT8D-219s as standard. Douglas MD-83 features increased fuel capacity as standard and higher operating weights. The typical range for the MD-83 with 155 passengers is around 2,504 nautical miles (4,637 km).