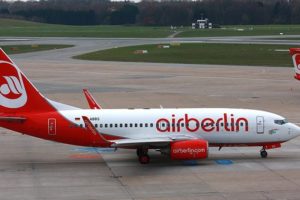 The deadline for submitting offers for the bankrupted German airline Air Berlin is September 15, according to the official statement of the carrier. The company’s plans are to end the deal by the end of September, as the financing is ensured only til November. The buyers of airline assets will be selected almost immediately in mid-September. Among the carriers that compete for Air Berlin assets are Lufthansa, Condor Airlines, easyJet and Ryanair.

The German aviation investor, Hans Rudolf Woerl, is also working on a bid, as well as the former Formula 1 pilot, Niki Lauda, has shown interest in redeeming Niki. The airline was founded by Niki Lauda and later sold to Air Berlin.

Air Berlin filed for bankruptcy in the middle of August after the largest shareholder and creditor Etihad Airways stopped financing of the indebted carrier. Following the bankruptcy, Air Berlin has begun swift negotiations to sell its assets. Most of them are expected to be acquired by German airline Lufthansa.

The German government granted a bridge loan to Air Berlin to continue the company to operate. The amount of 150 million EUR will be enough to keep planes of the company in the air for up to three months.