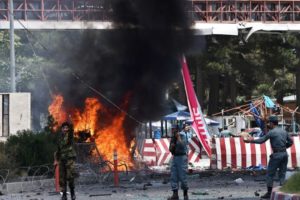 The death toll of the explosion near Kabul airport, which occurred shortly after the arrival of Vice-President Abdul Rashid Dostum on Sunday, increased to 23, which another 107 people are injured.

The explosion occurred near the Hamid Karzai airport on Sunday, after the arrival of Afghanistan’s vice-president Abdul Rashid Dostum, who fled the country because of suspicions of torture and kidnapping. The explosive device was activated by a suicide bomber. According to the police, he failed to reach Dostum, and brought the explosive device into effect when he was stopped by the law enforcement agencies.

General Dostum, who left Afghanistan last year after heavy pressure from Western donors including the United States, drove away from the airport in a motorcade only minutes before the explosion on Sunday.

One of the victims of the terrorist act was the driver working for the agency, who was heading for the night shift.