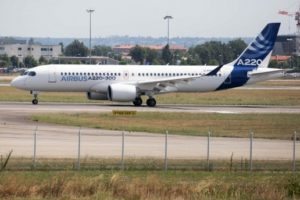 The American airline Delta Air Lines has ordered an additional 15 Airbus A220 aircraft, bringing the total number of ordered aircraft of this type to 90.

Additional orders concern aircraft A220-300 modifications and are the first for the airline. Prior to this, Delta Air Lines ordered A220-100 aircraft. In addition, the carrier also converted earlier orders for A220-100 aircraft to A220-300, bringing the total number of ordered liners of this modification to 50.

Delta placed its initial order for 75 Airbus A220 aircraft (then the Bombardier CSeries) in 2016. Airbus will produce the A220-300 at a new US plant in Mobile, Alabama. Construction of the plant, located next to the existing assembly complex Airbus A320, will begin in late January.

According to Airbus, today the order book for A220 aircraft is more than 500 aircraft.

Newer PostSpaceX completed the launch vehicle for a test suborbital flight
Older PostBoeing reached a milestone of 2,000 orders for the 777 family aircraft