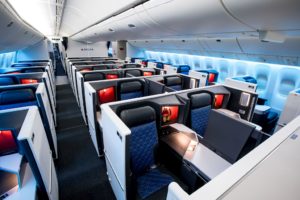 Delta Air Lines presented retrofitted Boeing 777 aircraft, which features with all four seat options – Delta One suites, premium select, comfort-plus and main cabin. This will improve its onboard customer experience that includes a cabin modernization, larger seatback entertainment systems and upgraded main cabin snacks. The comfort-plus seats will be added to four Boeing 777 aircraft that have been modified and the remaining 14 planes will undergo a four-seat transformation in 2019.

Delta Air Lines is a major United States airline, with its headquarters and largest hub at Hartsfield–Jackson Atlanta International Airport in Atlanta, Georgia. The airline, along with its subsidiaries and regional affiliates, operates over 5,400 flights daily and serves an extensive domestic and international network that includes 319 destinations in 54 countries on six continents.