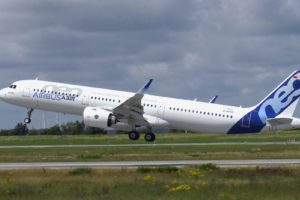 The airline Delta Air Lines plans to purchase about 100 aircraft by the European construction concern Airbus. The deal may be announced in the near future, but currently the negotiations are on advanced stage. The purchase contract is for the narrow-bodied passenger aircraft Airbus A321neo with engines produced by Pratt & Whitney.

Delta Air Lines had previously negotiated with the American corporation Boeing to purchase 100 737 Max 10 airliners, but failed to reach an agreement.

This will be another blow for Boeing, which previously lost an advantageous contract for delivery to Canada of 18 CF-18 Super Hornet fighter-bombers. They were to become transitional aircraft in the process of updating the outdated park of the Canadian Air Force.

This happened after a trade dispute, in which Boeing got involved due to a deal between Delta Air Lines and the Canadian company Bombardier. Boeing claimed that Bombardier sold Delta Air Lines its new C Series aircraft at a low price, which is why the American aircraft manufacturer lost the contract with the carrier. The US authorities followed an investigation and assessed that price of Bombardier C Series were under the market value, following the finance air provided by the Canadian government. They the US Chamber of Commerce proposed imposing of 300% customs duties for imports of Canadian aircraft in the US.

Delta Air Lines is a major American airline, with its headquarters and largest hub at Hartsfield–Jackson Atlanta International Airport in Atlanta, Georgia.