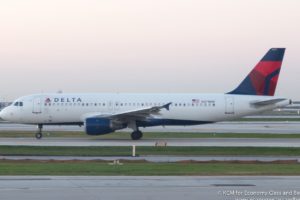 Delta Airlines Airbus A320-200 suffered bird strike into both engines during climbing from Sacramento to Salt Lake City in USA. The aircraft takeoff with 152 passengers and 6 crew, but struck a number of birds. According to the crew, the airplane passe through hundreds of birds, so the sky went derk and they coun’t see clearly. The pilots found the the aircraft impacted with some of them, suffering damages in the right hand engine and the wing. The Delta Airlines Airbus A320 returned to Sacramento airport, where safely landed at runway 34L about 15 minutes after departure.

Fortunately there were no injuries reported, but all the passengers were disembarked and rebooked for another flights, as the aircraft damages were assessed at significant.

The investigation shows that aircraft suffered bird strikes in both engines, but fortunately the left hand engine remained operations and allowed aircraft to return safely. The right hand engine was shut down, both leading edges of the wings as well as the nose of the aircraft sustained damage.

The Airbus A320 is short- to medium-range, narrow-body, commercial passenger twin-engine jet airliner. The airplane has set the standard as the world’s most comfortable short-to-medium-haul aircraft – which is just one of the many reasons why it’s also the most successful aircraft of all time. Incorporating a versatile cabin that can be configured for a variety of seating options, the A320 usually seats 150 passengers and has a maximum capacity to accommodate as many as 180 travellers.