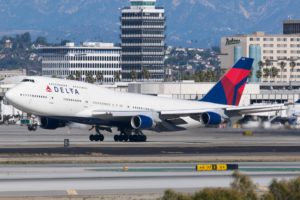 Delta Airlines Boeing 747-400 suffered engine problem shortly after take off from Narita Airport, Japan to Detroit, USA. The airplane with 310 passengers and 17 crew members was performing flight 276, but shortly after departure over the north Japan the instruments showed a problem in one of the engines. The crew immediately diverted the plane back to Narita Airport, where safely landed without causing injuries to the passengers.

During the inspection of the airplane Boeing 747-400 at the airport, a hole measuring 1×5 centimeters on the outer part of the engine was detected, which caused the indication for the engine problem. According to the authorities before the departure there was another inspection of the plane, which did not found such hole.

The authorities initiated investigation for the accident and will collect all the possible data from the plane indicators and witness evidences from the crew.

All the passengers were transferred to another plane and proceed with delay of 182 minutes.

Boeing 747-400 is four-engine wide-body airplane of Boeing, which is successor of the best-selling model of the Boeing 747-300. The aircraft also features an all-new interior with upgraded in-flight entertainment architecture. The model has a maximum capacity of 660 passengers with the 747-400D variant,[4] and can fly non-stop for up to 7,670 miles (14,200 km) with maximum payload.