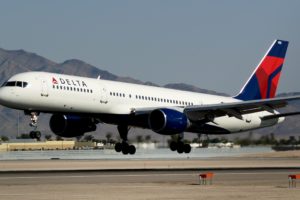 Delta Airlines Boeing 757 suffered engine fire during climbing from Las Vegas’ runway 26R en route to New York. The aircraft took off, but shortly after that the crew crew declared emergency, due to fire in left engine PW2037. The accident was reported to dispatcher and after confirming about the fire in the left engine it was stopped. The aircraft Boeing 757 was allowed to return to runway 26L, where landed safely several minutes later. There were no reported injuries, but emergency teams were prepared to assist the aircraft and people on board.

Attending emergency services reported seeing some smoke from the engine, a few minutes later the fire chief advised the fire was out. The aircraft was released to taxi to the terminal, being followed by all fire engines.

All the passengers were transfered to replacement Boeing 757-200, which reached New York with a delay of 7:45 hours.

Boeing 757 is a mid-size, narrow-body twin-engine jet airliner. It is the manufacturer’s largest single-aisle passenger aircraft and was produced from 1981 to 2004. The twinjet has a two-crew member glass cockpit, turbofan engines of sufficient power to allow takeoffs from relatively short runways and higher altitudes, a conventional tail and, for reduced aerodynamic drag, a supercritical wing design.