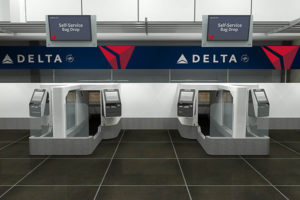 The American Delta Airlines offers passengers to contact customer service representative using a video chat from Ronald Reagan Airport in Washington. Such technology is not offered by any American carrier and currently Delta Airlines released the pilot project.

There are five interactive digital screens with individual receivers that can be used for video communication with the airline operator in order to change the flight or simply report the problem. One on the stations is equipped for travelers with disabilities.

“More and more people are choosing to use the video chat in everyday life and we realized that we can implement the same”, said Charissa Evans, vice president of sales and customer service. “After all, we are interested in making our service more personal”, added she.

Delta has been testing technology that allows some travelers to enter the airline’s SkyClub and board flights using their fingerprints, rather than paper or mobile boarding passes. Soon, the airline said some passengers in Washington also will be able to check bags using fingerprints.

Delta Airlines is a major American airline, with its headquarters and largest hub at Hartsfield–Jackson Atlanta International Airport in Atlanta, Georgia. The airline along with its subsidiaries and regional affiliates operate over 5,400 flights daily and serve an extensive domestic and international network that includes 319 destinations in 54 countries on six continents. Delta is one of the four founding members of the SkyTeam airline alliance, and operates joint ventures with Air France-KLM, Alitalia, Korean Air, China Eastern Airlines, Virgin Atlantic, and Virgin Australia.