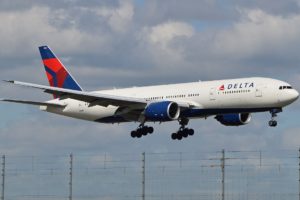 Delta Airlines removed Russian citizen from Seattle-Atlanta flight for violation of security rules. The company noted that the client was interrogated by the police, and then he was transferred to a later flight to Atlanta.

“While the flight 1588 from Seattle to Atlanta, which was sent on July 24, was preparing to take off, a late arriving passenger broke through a closed door at the exit to land and thereby triggered the alarm”, said the statement of Delta Airlines. “He was interrogated by law enforcement for breaking security rules and was then booked for a later flight to Atlanta”, said also the statement.

However, the passenger has another story and claimed that he was kicked off the plant because of being Russian citizen.

“I was kicked out from the plane Delta airlines!!!! For being Russian citizen. Not kidding. Passenger next to me refused to fly with me because according to him I was an occupant of Crimea as well as other Russian citizens”, wrote Andrei Yeryomin in his Facebook page. “As a result had to take another flight much later. Funtime idiots. God bless America. Time to go home after 22 years of living here”, added he.

Delta Airlines is a major American airline, with its headquarters and largest hub at Hartsfield–Jackson Atlanta International Airport in Atlanta, Georgia. The airline along with its subsidiaries and regional affiliates operate over 5,400 flights daily and serve an extensive domestic and international network that includes 319 destinations in 54 countries on six continents.