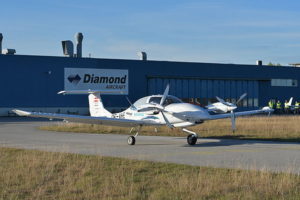 Austrian company Diamond Aircraft tested its hybrid twin-engine light airplane, which was developed on the base of DA40. The tests took place on October 31, 2018 and were recognized as completely successful. In total, the first flight of a hybrid aircraft, in which development participated also the German company Siemens, lasted about 20 minutes. In the near future tests of the aircraft will continue.

The hybrid aircraft engines run on electricity, which, in turn, is produced by a turbo-generator and accumulates in batteries. In the turbogenerator, as a power plant, practically any internal combustion engine (gas turbine, turboshaft, diesel) can be used, if its power is sufficient for promotion of the generator envisaged by the project.

Today, several companies in the world are engaged in the development of hybrid aircraft. The developers believe that the new aircraft will be significantly more economical and more environmentally friendly than modern aircraft, in particular, due to cheaper maintenance and much lower fuel consumption. First of all, hybrid airplanes are planned to be used on short-haul routes instead of turboprop aircraft and jet “crossovers”.

Light aircraft DA40 is a four-seater single-engine piston aircraft with a pulling propeller in the bow. The developers removed the piston engine from the aircraft and installed a 110 kilowatt diesel generator instead. Two rechargeable batteries with a capacity of 12 kilowatt-hour each, installed in the cab instead of a passenger row of seats, are recharged from it. The generator and batteries feed two electric motors placed in the engine nacelles rendered on the front horizontal tail. The total power of the motors is 150 kilowatts in takeoff mode.

According to the developers, the aircraft will be able to be fully airborne to half an hour when the batteries are fully charged, but in a hybrid mode with the diesel generator turned on, this time will increase to at least five hours. During the first flight of the modified hybrid DA40, experts checked the work of the hybrid propulsion system, the balancing of the aircraft, handling and maneuverability. In addition, an inspection was carried out of the system of separate control of electric motors.

During the tests, on October 31, the plane took off with the diesel generator turned off, climbed to a height of 914 meters and picked up speed of 130 knots (241 kilometers per hour). In the air, the experts checked the aircraft in three modes: powering the electric motors from a diesel generator without charging the battery, charging the batteries and in a fully electric mode. In the near future, it is planned to conduct additional flight tests of the aircraft in order to assess its noise and environmental performance relative to the base DA40.