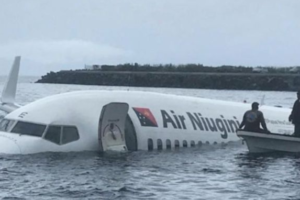 Divers found the body of a missing passenger during an emergency landing of the Air Niugini’s Boeing 737-800 in a lagoon in Micronesia.

“With great sadness, I confirm that the man’s body was discovered today by divers after they conducted a search in the Chuuk Lagoon region”, says and official statement of Air Niugini. The airline reported that they are taking steps to transfer the body to the relatives.

In investigation for the root cause of the accident is being conducted.

On September 28, Boeing 737-800 operated by Air Niugini, flying from Pohnpei Airport to Chuuk/Weno International Airport, came to rest in a lagoon during an attempted landing at Chuuk International Airport in Micronesia. The aircraft landed in the water about 145 metres off shore from the runway 04 threshold. Six passengers were hospitalized after the accident. One passenger was reported missing.

According to local media, the plane tried to sit down, but fell into the water about 150 meters from the runway. On board the aircraft were 36 passengers and 11 crew members. It was reported that all of them had been examined by doctors, and there were no reports of serious injuries. The airline later said it was working with local authorities, hospitals and investigators in order to establish the whereabouts of one missing passenger.

More about the accident:
Air Niugini’s Boeing 737-800 landed by emergency in lagoon in Micronesia [28/09]