In 2016, for the seventh consecutive year, the number of deaths in air accidents from regular flights of companies certified by the United States was zero.

According to experts, the probability of dying in a plane crash is one of 11 million. Because of this, it is considered as the safest means of transport on the planet.

In 2016, for the seventh consecutive year, the number of deaths in air accidents from regular flights of companies certified by the United States was zero.

Even so, curious travelers may still be wondering which is the safest place on an airplane in case of an accident. It turns out that the answer depends on the type of accident that occurs.

“Every setback or accident is unique,” says Alison Duquette, a spokeswoman for the Federal Aviation Administration. The impact can be the product of a plummeting, a landing on the water or a collision on the runway, for example. In conclusion, according to Duquette, “there is no safe seat.”

According to a spokesperson to the HuffPost, the National Board of Transportation Security (NTSB) does not keep statistics related to the position of seats or has conducted any study on the safest seats on an airplane. However, two important media have done so.

In 2007, Popular Mechanics magazine analyzed the data that the NTSB had collected of all the accidents that had taken place on commercial flights in the United States since 1971 in which there had been both survivors and deceased. His conclusion was the following: 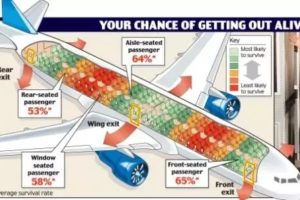 The passengers who sat in the seats at the back of the plane, those located just behind the wings, had a 69% chance of surviving, while those who sat in the wing area had a survival rate 56 percent.

Passengers in the seats at the head of the plane – 15% of total seats – had a 49% chance of surviving, analysts said.

A second study conducted in 2015, for which Time magazine researchers analyzed data from the Federal Aviation Administration for 35 years, obtained similar conclusions.

The research group reduced the analysis to 17 accidents that occurred after 1985 in which there were both deaths and survivors and found that passengers who sat in the final third of the plane were less likely to die (32%) than those who sat at the height of the wings (39%) or in the head of the plane (38%).

In fact, passengers occupying the most centered seats in the rear of the plane were the best unemployed, with a mortality rate of 28%. 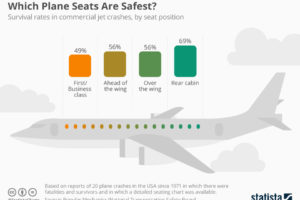 The least safe seats are those located in the second third of the cabin, with a mortality rate of 44%.

Time researchers realized that the specific circumstances of an accident can make these statistics less relevant, but in general, the back of the plane is the safest.

On the other hand, in case of accident, there are also other ways to increase the chances of surviving regardless of where the seat in which you are traveling is located: pay attention to safety warnings, know the number of rows until the exit closer and be prepared to be placed in fetal position (it is safest to hug the legs keeping the soles of the feet close to the ground).