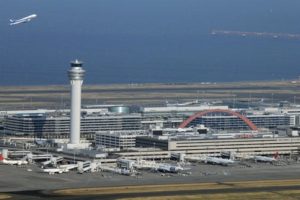 The dog interrupted the work of Tokyo Haneda Airport. The animal ran to one of the runways, which endagered the landing of several aircrafts. Some planes had to spend more time in the air and totally 14 flights were delayed. The operators of the airport succeeded to catch the dog only after 40 minutes.

The poodle escaped escaped at Tokyo’s Haneda airport while cargo crews were loading its cage onto a Japan Airlines flight bound for Naha in Okinawa. It was in special basket for transportation, but jumped outside. The poodle was dashing across a runway and sniffing around in grassy areas, but crew took lang time until catching it.

The commotion caused one of the airport’s four runways to be closed twice for a total of six minutes, delaying departures and landings.

Japan Airlines said it would question its staff about the incident and check if there were any problems regarding the loading procedures.

The airline and the airport administration began an official investigation for the root cause of the accident.

Tokyo International Airport, commonly known as Haneda Airport, is one of the two primary airports that serve the Greater Tokyo Area, and is the primary base of Japan’s two major domestic airlines, Japan Airlines (Terminal 1) and All Nippon Airways (Terminal 2), as well as Air Do, Skymark Airlines, Solaseed Air, and StarFlyer. It is located in Ota, Tokyo, 14 km (8.7 mi) south of Tokyo Station.