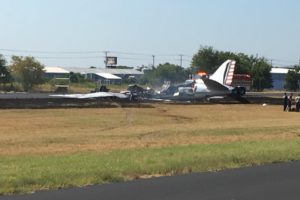 Douglas C-47 crashed and caught fire after runway excursion during takeoff at Burnet Municipal Airport, Texas, USA. The aircraft came to rest in the grass next to the runway and burst into flames. All 13 on board survived the accident, while five suffered minor injuries.

The aircraft, a vintage Douglas C-47 named “Bluebonnet Belle”, was on its way to an air show in Oshkosh, Wisconsin, when it crashed in the town of Burnet. At a video shot by aviation enthusiasts, the plane can be seen dipping dangerously to the left just after takeoff.the left wing dropped and the wing tip touched the ground, causing the plane to slew to the left and touch down again. The right hand main gear then seems to fold as the aircraft comes to rest in a cloud of dust. The plane’s wing hits the ground and the aircraft comes to a stop as it bursts into flames.

The 13 people on board succeeded to escape the flames. At the scene arrived firefighters, which extinguished the burning wreck.

However the aircraft is a total loss.

The Douglas C-47 Skytrain or Dakota (RAF designation) is a military transport aircraft developed from the civilian Douglas DC-3 airliner. It was used extensively by the Allies during World War II and remains in front line service with various military operators.