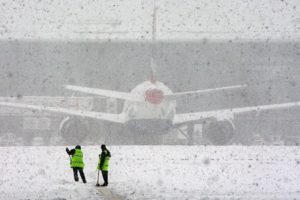 Dozens of flights were cancelled and much more were delayed due to snow in UK during the weekend. The bad weather paralyzed air and rail transport, including delays and flight cancellations at the London airports. The unusual situation blocked the traffic. In some parts of Wales there was a snow cover has height of 17-30 cm.

The London’s main airport Heathrow is working with large delays and dozens of European flights were canceled. Passengers described scenes of confusion and frustration. Some people boarded planes and waited for hours on the tarmac, only to have their flights cancelled. Passengers waited for hours in lines that wound through the airport to speak with airline representatives. Many arriving flights were diverted.

“The Heathrow Airport is still open. We, however, regret that the situation in the UK is reflected on passengers and disrupted their plans. The airlines are responsible for ensuring that the aircraft were completely freed from ice before flights and it causes delays and flight cancellations”, says official statement on the airport’s website.

The airport is urging people to check their flight status before they travel and and those whose flights have been cancelled are asked not to travel to the the airport.

Some 50,000 other British Airways passengers, they will start Monday far from where they planned to be, after the airline’s operation juddered almost to a halt at Heathrow. More than 140 outbound short-haul flights, and 26 long-haul departures, were cancelled on Sunday British Airways has cancelled a further 70 short-haul round trips on Monday, plus nine long-haul flights including departures to Rio, Tokyo and Los Angeles. An additional 15,000 people will be affected by these latest cancellations.

In Britain, Birmingham airport, serving the country’s second biggest city, suspended flights for all of Sunday morning, as staff worked to clear the runway in heavy snow.

In addition to transport there are other troubles – in many regions of the country people were left without light, in a number of cities on Monday schools will be closed, as, for example, in Buckinghamshire and Shropshire.